Ohne Mauern @ JenaTV Filmmakers from Jena against Walls in Heads 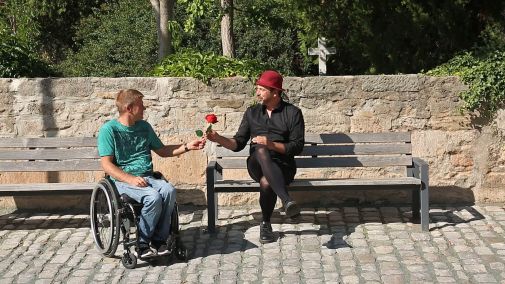 The cellu l’art Short Film Festival cannot happen in its initially planned form on the 21-26 April this year and is now postponed. We would like to show you two short film programmes on local JenaTV as a small consolation. One of them - “Ohne Mauern” (“Without Walls”).

Large misunderstandings between people can happen in our world. The filmmakers from Jena have their own artistic views on how the walls in heads can be demolished. Together with the associations KinoDynamique Jena and FilmThuer we would like to give the opportunity to share their opinions.

Six films will be shown on the 24th of April at 9 pm. With their films the local filmmakers explore different phenomena of social and cultural life, from the self-finding during teenage years and world war to the collision of virtuality and reality; from the theater initiative to merge politics and art to the inclusion of a person or a family.

All films are in German. The programme will be shown on JenaTV with simultaneous streaming on the internet on JenaTV.

Some of the films might not be suitable for an audience under 16.

We would be very grateful for your help in financing the screening. If you would like to donate donate, please click the button below.

Being different does not always mean wrong. A father presents his special family and their shared happiness, despite some obstacles.

30 years after the Peaceful Revolution, the ensemble of Freie Bühne Jena staged a play in which fear is contrasted with hope.

A recruit and a corporal officer of the Wehrmacht find refuge in a farmhouse. While Hagen clings to his ideals, the recruit tries to show him his affection.

The difference between reality and VR is becoming increasingly more obscure. What remains: the search for love or the escape into another reality?

Watch a normal day of our protagonist and how he gets through the day despite obstacles.

When daydreamer Leo meets his new classmate Jessica, his life turns upside down.