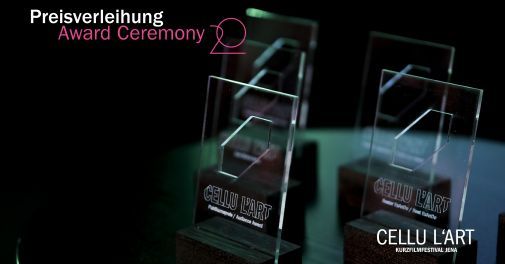 Right now in Volksbad happens the Award Ceremony of the 20th cellu l'art Short Film Festival. The Jury, Youth Jury and Audience will give 5 prizes to the best of the 31 films of the International Competition. Stay tuned and don't miss the best films!

We are really excited to present the winners for the „Best Ficition Film“, „Best ExAnDo“ (Experimental/Animation/Documentation), the „Audience Award“, the „Jenaer Lichtstadt Award“ and the „Youth Jury Award“.

And here we go!
Johannes Selle from the CDU greets the audience
The curators introduce the Jury and the Youth Jury. The Jury shares their impressions about the festival

THE YOUTH JURY AWARD GOES TO "ALL THESE CREATURES" by Charles Williams!

The Major of Jena, Dr. Thomas Nitzsche, and the Jury member Enrico Vannucci are announcing the winner of the Jenaer Lichtstad Award.

And now the ExAnDo Award - for the best Experimental, Animation or Documentary film. Britt Raes won this award at the 19th cellu l'art short film festival, and now she announces the Jury's decision.

THE WINNER IS "SWEET NIGHT" by Lia Bartels!

A small creative "thank you" from Lia Bartels

Dr. Ute Danz from our sponsor, Diva-e, and the Jury member Jutta Wille announce the winner of the Best Fiction film Award!

THE AWARD GOES TO "BEAUTIFUL LOSER" by Maxime Roy!

And the last but not the least - the Audience Award. The whole week the audience of the International Competition screenings had the voting sheets, where they could give notes to all the films they see. We calculated everything and got the result... The festival director Malte Stoffers thanks the audience and the sponsors of the Festival and announces the winner...

So, all the prizes are awarded. But the ceremony still goes on...

Do you remember the Green Screen Workshop by Douwe Dijkstra? Now we watch a short film he made with all the volunteers and guests of the festival! Very funny :D

And one more short film about this festival from our camera man Christoph Marquardt.

And the last and probably the most important procedure - we have to thank once again all the sponsors, the Volksbad, the technical staff and, of course, all the cellu l'art team and volunteers!

With this we close the Award Ceremony. However, this is yet not the end of the festival! Tomorrow we will show once again the winning films, the B-sides of the festival and one special programme - "Turning points" with the films from GDR.

Thank you for being with us!